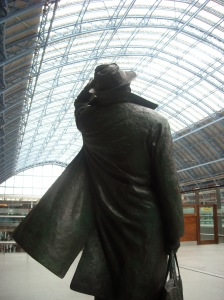 I wrote a blog a few months ago about being made redundant and how that had led to me going back to being a full time student. Well, this is a follow up to that blog, it’s about the final stages of that MSc process – the dissertation! I have now successfully managed to negotiate my way through that first 2 terms of lectures and seminars, as well as the 6 assessed essays, achieving marks well beyond what I thought was possible at my age and after so long away from the academic world. Now to the really difficult bit, choosing a subject, researching it and writing it all up as a dissertation.

Embarking on an MSc dissertation is like taking a journey of discovery, not just about your topic but also about your own thinking and that of others. It’s about rediscovering the challenges and opportunities presented by an issue, finding out what others have written about it, how they researched it and what conclusions they draw from that process. The journey of discovery starts with an idea, an often ill-informed notion that is of interest but perhaps little more than that. This idea is then reworked, explored, reframed and revised before a plan can be put together, a plan that takes you on the next stage of the journey where discovery becomes central to the process.

END_OF_DOCUMENT_TOKEN_TO_BE_REPLACED

Sometimes the idea for a blogpost comes from some research or information I have just read, other times from something that’s made me angry, or something that’s just topical, in the news and I have a view on it. This blogpost has been bubbling up for a while and is probably a reaction to all these things and may well be less coherent for that!

The title says it all really – the slow death of society – that’s what it feels like at the moment on so many levels. This isn’t just something that has happened since the Coalition Government came to office either, this is something that has been happening since even before Thatcher. Maybe it’s symptomatic of a neo liberal society or maybe we are all too conditioned to things the way they are that we fail to notice? Whatever the reason, there’s been a noticeable change in attitude in my lifetime which seems only to have got worse in recent years – and still I am waiting for the collective response that must surely happen?

When I think about the number of times over the last 10 or so years that I have heard people respond to issues/questions with ‘what’s in it for me?’ I begin to despair, of course we all have an element of self interest and indeed we do need to look after ourselves and our family/friends, but there is a big world beyond that and we seem to care less about it now then we did before, or am I wrong? Maybe I have just spent too long in the wrong places with the wrong people?

A recent example that made me both smile and bury my head in my hands was this whole issue about spikes in doorways to keep homeless people from sleeping there. This caused a massive reaction on social media, with people expressing horror whilst others reacted with stories about why it is necessary and how it is actually designed to help homeless people in the long term. I’m not quite sure where I fit on the scale of reaction but as others have said, this is nothing new, architects, designers and planners have been designing out these kind of spaces and opportunities for years. Talk to anyone involved in planning new open spaces and parks, they’ll tell you how much thought goes into the design of benches and shelters to discourage ‘undesirable’ behaviour, which often seems to include making them so uncomfortable that you wouldn’t sit on them let alone try and sleep there! What is interesting about this is that much of the reaction has focused on the symptom not the cause – which is understandable to a point, but really this is a symptom of a much broader ill. It’s about our changing attitude to the most vulnerable in society, the demonisation of the poor, the jobless, the homeless and the constant reminders that to be acceptable and provide a worthwhile contribution to our society we have to have a job, pay our way and above all, avoid any reliance on the state to support us.

This change has been playing out in our housing system for many years, where the role of the state (councils) in providing and managing housing has been gradually reduced to a residual role for the most difficult households and those in the greatest poverty. Council housing is no longer the tenure of choice for many it is a residual provision for the most needy in society (and a need we are not adequately meeting). We have shifted affordable housing provision, successfully to a point, to Housing Associations, set up to deliver on this very issue. Then, of course, we have gradually eroded their role by reducing the direct funding they receive, so they have to enter into development for profit in order to fund the delivery of affordable housing, or they have to comply with other aspects of government policy that actually make housing less affordable to those that need it. In the meantime, councils have barely been able to build new council houses and more existing council houses have been sold off under the right to buy, so fewer homes are available to those in need, meaning many more are forced into the private rented sector that is barely able to keep up and has issues of its own. In a civilised society, the provision of decent housing has to be a fundamental right, but government seems to have turned its back on this notion, unless you strive for owner occupation, then they’ll help you!

We seem to have become a nation of individuals only interested in looking after ourselves and resisting anything that might impact on our ability to do well. Again, housing is a prime example of this, as soon as we become part of the property owning democracy we also become Nimbys, we will do just about anything to stop development anywhere near us to make sure our property prices are not damaged, irrespective of the consequences for anyone else. The power of those that have, to stop those that haven’t, seems to win out regularly.

Another example is playing out in Bristol at the moment in relation to the fight over Residents Parking Zones. Much of the debate has focused on how the right of car drivers is being curtailed and how this will destroy the economy of the city. Car drivers and businesses have talked about infringement of their rights, of the Mayor being anti-car and how somehow implementing these schemes will make the city a worse place for everyone. Really? Somehow we seem to have lost sight of why the Mayor is implementing these schemes – and yes I accept that his approach and style has not helped with selling these schemes – but the concept has got to right, hasn’t it? We all want a city that is less polluted, where we can walk and cycle in safety, where we can enjoy our neighbourhoods without constant streams of cars searching for parking spaces or parking dangerously, don’t we? We want a city that works for people, that doesn’t remove or hinder people that need to drive but makes it just a little more difficult for those that use it as an easy, cheap option, without considering the alternatives and those that see our neighbourhoods merely as one big car park. I applaud George for standing strong on this, even if I wish he had implemented things slightly differently with greater engagement from the start – the concept is right even if the approach has been difficult!

But it’s not all bad is it? Look at the endless articles/blogs/research about housing, welfare, poverty, there are people that care, there are people that are raising the difficult questions. The problem at the moment seems to be that decision makers are just not listening, or they are but not properly, they snatch at easy ‘solutions’ to pretend they are doing something without any notion that they will have an impact.

What I have noticed is a society of extremes – those that don’t seem to care about anything going on around them and are only interested in themselves, but also those that do care and are trying to do something against a rising tide of indifference. Maybe the Big Society is working because many of the positive things going on are driven by local communities or charities – who set up the food banks to help those that could’t afford to feed their families? Not the government, in fact they spent more time denying they existed or challenging whether or not the people using them really needed to!

In Bristol I have seen much of this local response play out in many different forums and guises – people do care and will support others where they see a need or where they see injustice. There are too many projects to mention but one small but fascinating project that caught my eye is the Incredible Edible Bristol project, providing edible landscapes across the city, in neighbourhoods and the city centre, in parks and derelict spaces. What a brilliant idea to show how easy it is to grow food in a city with access for all. What motivated people to start that project and what motivates all those that help out with their time and money – not self interest that’s for sure.

So maybe things are not all bad, there is some semblance of ‘society’ out there, despite the best endeavours of government to destroy it over the years. We need people to continue to write about these things, we need the media to cover the issues properly but above all we need people to be motivated to do something. A few years ago I was asked to do a Q&A for the Evening Post and one of the questions I was asked was ‘who inspires you?’. My response to this initially surprised a few people, because aside from my personal heroes like Colin Ward, Mo Mowlem and Albert Camus, I mentioned Margaret Thatcher. With this came the caveat that she inspired me to get involved in politics, because I wanted to be part of the political fight against her policies and her notion of the primacy of the individual. That fight still remains, but are enough people motivated to do something? This is perhaps where my despair comes in, we seem to be a society of demotivated individuals who don’t think we can change things, where even bothering to vote is too much effort because it won’t make a difference anyway. I hope I’m wrong!