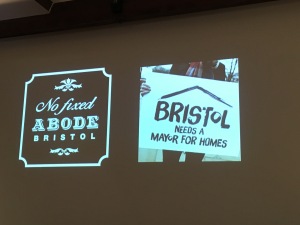 You might wonder what there is left to say about housing in Bristol with all the debate that’s occurred over the last few months? We seem to have had all the main mayoral candidates talking about it, making promises and pledges in their manifestos and statements. We’ve also had it mentioned in media interviews and articles, as well as at hustings meetings across the board. But what about the housing hustings meeting itself, did anything different come up and were there any real solutions to our housing problems?

Overall there seemed to be a lot of common ground, with the five main candidates all agreeing that we need to build more homes and George Ferguson, the current Mayor, saying plans were in place to do just that. The Conservative candidate, Charles Lucas, constantly referred to the need to build more homes, whatever type or sector, just build, seemed to be his main answer to the housing crisis, alongside making it easier for developers to build by relaxing planning regulations – everyone agreed with the first part of this statement! There was also agreement over the need for some form of housing company to enable the council to build more homes, but quite what this looks like and how it will operate is less than clear at the moment.

George Ferguson expressed the view that we need to tear up the rulebook and be more creative. That’s why he’s set up the Bristol Homes Board, bringing partners from all sectors together to tackle Bristol’s housing problem. He also talked a lot about the Devolution Deal and how this would help to address housing issues. I have to say that I’ve read the deal and I still can’t quite see how it will make that much difference, assuming it’s finally approved by all our local councils, but apparently there’s something in there that will help deliver housing.

The Liberal Democrat candidate, Kay Barnard, seemed to have a bit of an issue with council staff and their lack of expertise/experience in certain areas. In answer to several questions she suggested the need for training, as staff at the council simply don’t have the skills to deliver more homes. Other issues she seemed keen on were the idea of creating an arms length company to deliver homes as has been used in Liverpool, Manchester and Sutton (I’ve yet to check what these look like). She also expressed concern that many housing schemes that have been delivered in Bristol have had little affordable housing included as part of the deal, in her words “the planners need to be tougher”.

From Tony Dyer, the Green Party candidate, we had a thoughtful response to many of the issues, with social and affordable housing taking centre stage and the need to build social houses for rent expressed clearly as a priority. Using council owned land to deliver better quality affordable housing was also a key concern, holding onto land and maintaining control a clear way forward (also expressed by Marvin Rees). Tony also mentioned the impact of government policy and how this has made it even harder for council’s to build social housing, at the same time as encouraging loss of council housing through the right to buy. This is why he is in favour of developing a Bristol Housing Company, to protect new and existing stock from being sold off, as well as to help develop new council homes.

Charles Lucas added to his comment about building more homes by flying in the face of national Tory policy and agreeing that this should be across all sectors, including building social housing for rent and increasing the council housing stock in the city. He also made clear that he thought the planning department was under-resourced, and that in order to attract developers into Bristol we need to have a more efficient planning response that makes it easier for developers.

Marvin Rees , the Labour Party candidate, set out his priorities as building more homes, keeping hold of council land and using the increase in value from development to build more homes. Homes and communities are at the top of Marvin’s agenda and he believes this should be an absolute priority now. Marvin also raised the point about choices, with limited budgets choices have to be made about where resources are spent, there’s money  and land that could have been used to deliver more homes but other priorities were clearly more important. Marvin talked about meetings he’d had with organisations who want to invest and build in Bristol but have found it too difficult, so they have gone elsewhere, illustrating the need for a culture change at the council. This claim was refuted by George, who suggested that it used to be an issue, but is less so now.

All candidates agreed that the council needed to make the best use of council and other publicly owned land to deliver affordable housing in the city. How this is done and how you can break down the very considerable barriers that seem to exist was less clear from the debate. The intention is there, but we also heard from people in the audience involved in community led housing initiatives who have witnessed those barriers first hand, who claim dealing with the council is impossible, slow and ponderous to the extreme. There are communities in Bristol that have identified space for housing through their neighbourhood planning processes, spaces communities are willing to see developed, but which have stalled because of issues over land ownership, planning, and council commitment. What they see instead is the council selling off public land in their areas for private developers to build on with limited input from the community. What they would prefer is community led development, on sites identified by the community, where they have a real say over the type of housing, what it looks like and what facilities are needed alongside it. All these communities want is a commitment from the council to support a different way of doing things. Surely there must be scope for Bristol to do so much more in working with communities to make this happen?

The debate actually started with a question about homelessness which brings us back to why we need to build more homes, particularly affordable and social housing. Tony made the point that it is a disgrace that people sleep on the streets in a city like Bristol and he issued an apology on behalf of all politicians that not enough was being done to prevent homelessness. All candidates agreed it was unacceptable to have rough sleepers, whilst Marvin added to this and made the point that the homeless are not invisible, they do exist and we need to acknowledge that and rethink the way we think about housing. There are places doing more innovative work on homelessness, Bristol could do well to look at other examples of how to tackle the problem.

There was also a discussion about how to make the private rented sector (PRS) work better for people. Most of the candidates agreed with the Ethical Lettings Charter promoted by Acorn as part of their campaign promoting a new more ethical approach to renting a home in Bristol. Marvin talked about the need for a different set of tools to manage this form of housing, tools which are not currently available but are needed in this changing housing market where private rental is becoming increasingly more common. The Acorn campaign was formed because people believed the politicians and decision makers were not doing their job properly, they were not seen to be protecting tenants or using the powers they already have very effectively. Most agreed this should change.

What the housing hustings did illustrate well was that housing is a big issue, it’s an issue lots of people care about and it’s a political issue. On a Friday evening, on a bank holiday weekend, lots of people turned up to listen, heckle and support the discussion on “what next for Bristol housing”. The issues are obvious, the solutions are available, but somehow we’re not quite doing enough to make enough of a difference. The question is who will make that change and make things happen differently? Hopefully, we’ll know more after the election!

1 thought on “What next for Bristol Housing?”