This blogpost is a bit of a departure from my normal writing. It’s not about housing, politics or policy, and not even about my PhD, but it is about endurance, challenge and determination. It’s also about inspiration, support and hope. I’ve written it because over the last 10 weeks or so I’ve watched a story unfold on social media, one that I have but a few minor connections to, but which nevertheless has drawn in many people. It’s a story about five men embarking on an adventure, determined to challenge themselves and set records whilst raising money for charity. It’s also a story about the power of social media to engage people, to provide much needed support and bring people together in a common cause.

Just over seven weeks ago a tiny rowing boat, with five men aboard, set off from Lagos in Portugal to row unsupported across the Atlantic to Venezuela, a mere 3,807 miles! This is my review of that journey together with a few comments about how Team Essence have managed to carry so many people with them along the way. But first, seriously, why would anyone want to do this? The trip was the brainchild of Mathew Bennett, the founder of Acorn Group, a company set up to work with vulnerable children and young people to give them the best chance in life. A few years ago, Matt decided he wanted an adventure and set out to persuade a group of friends to join him (Aldo, Foxy, Ollie and Ross), and thus Team Essence was born! Five men, all in their mid-late 30s, all keen to challenge themselves in the ultimate rowing adventure – rowing 2 hours on, 2 hours off, 24/7 for around 50 days in a tiny boat across a massive ocean!

In the weeks just before they set off the guys put out a call on social media to help them with the final items needed for the trip – it was a long list. Such things as sun glasses, chocolate, sweets, talc, sun cream, multi-vitamins, wet wipes, sheepskins and biltong were included. Within a day or so, their substantial army of supporters on Twitter and Facebook had persuaded a range of large and small organisations to provide pretty much everything on their list for free – an amazing example of the power of social media and of how they had captured the imaginations of so many people in a short space of time.

On 7th February, the team set off from Lagos, with a large crowd watching from the harbour and many more viewing live on Periscope. The first couple of weeks looked like a living hell, their tiny boat was battered by the Atlantic, capsized three times,forcing them to spend up to 12 hours at night on para-anchor in tiny cabins as they waited for high winds and 30ft swells to subside as they moved along the coast of Africa towards the Canaries. Thanks to Inmarsat Global the team have been able to send blogs, pictures and videos regularly so their friends and families, as well as everyone else on social media could keep up with their daily challenges and adventures. It also allowed the team to receive valuable information and weather updates to help make the most of currents and attempt to avoid the worst of the weather (updates provided by Peter ‘Silver’ Fox, Foxy’s dad). During these first few weeks the descriptions and videos provided by the team on what happens during and after a capsize are perhaps the most terrifying to read and watch. Quite how they managed to stay so calm and collected when overturned and thrown overboard in stormy seas is beyond me, but they seemed to manage it with great serenity and individual control. You can read these blogs and watch the videos on their website: Team Essence – The Rogues of Ocean Rowing or their Facebook page. 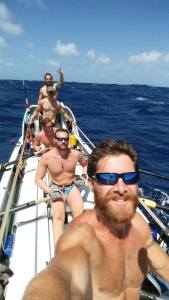 Thankfully, the seas seemed to calm and weather subside a little after they moved away from the Canaries on towards the Cape Verde Islands, with better currents and seas once they headed away from land and into the middle of the Ocean. They enjoyed sunshine, rather than rain, and saw dolphins and whales, beautiful sunrises and sunsets. Finally, luck seemed to be on their side and they very quickly fell back into the routine and discipline of 2 hours on, 2 hours off that few of us would be able to cope with. Imagine, you’ve just rowed for 2 solid hours, had less than 2 hours sleep and now you have to go back out to row for another 2 hours! Your hands and backsides are sore from rowing, you lost your shoes when the boat capsized so are rowing barefoot and you’re expending many more calories in 24 hours than you can actually consume. And remember, you have to keep doing this for 50 days!

Back home, the support on social media has been astonishing. Donations, rowing challenges, messages of support and all round interest has continued to grow throughout the journey. The guys have also now raised well over £100k for the NSPCC, to help improve children’s lives because every child matters, and I’m sure the donations will keep on coming in – donate here. Here’s a reminder, from Matt, the team captain, on why they are doing this:

“All of the team agree that there have been many dark moments on this voyage, At some point we’ve all had to face fear, disbelief, exhaustion. Whilst i’m writing this now, my mind fights pain from open sores and severe tiredness, there is always a voice reminding me how there are children back home that need reaching out to, need help, need comfort and belief. With this thought I grit my teeth and pull all the harder. My worries and hardship fall away against the plight children face each day. The exploitation, abuse and neglect that some children suffer is beyond imagination and HAS to be stopped.”

Pain, fear, determination and camaraderie are described by Foxy as the ingredients needed to make any adventure worthwhile, because if it were easy it wouldn’t be worth doing! It seems to me that these ingredients were there in abundance and were indeed all a key part of the success of the challenge. Not only have the team set a new record for crossing the Atlantic, unsupported on a long and difficult route, but they have done it with humour and humility, making light of many of the challenges. Their blogs, written whilst being tossed around in a tiny cabin, in a tiny boat, are funny, intelligent, insightful, thought-provoking and often philosophical in their outlook. They are also frequently the master of understatement, illustrating the pure humility of the authors when faced with adversity and danger, turning this into a series of factual statements and recovery processes that would be beyond the grasp of most of us.

Their journey continued out into the middle of the Atlantic, far away from anywhere, surrounded by sea and sky and nothing much else. Reaching the halfway point around day 27 was an emotional time for the team, which was celebrated with a drop of rum safe in the knowledge that every pull on the oars brought them nearer to their destination. As they neared Tobago and got their first sight of land you could feel the excitement grow, with family and friends making their way to Trinidad to welcome them, and their Twitter following waiting to see the arrival live on Periscope (with thanks to Jade Gandey for all her efforts on social media to keep everyone in touch), everything was set for a new record to be established when they touched down in Venezuela. What a challenge, what a journey and what an achievement.

From watching the sheer level of support on social media, reading the team’s thought-provoking blogs and following their progress daily, there are many things I have personally reflected on as a result. The very strong messages that emerge are about making changes and seeking to inspire others, about doing the difficult things with humour and grace, and taking up those challenges that maybe we have shied away from in the past, but above all I’ll take away the thought that we need to live our lives for the moment and be ‘happy with the right now’. That’s particularly pertinent for me, I’ve always been a fan of putting the past to bed, moving on and looking forward with a positive attitude, but maybe sometimes I do forget that now is important too and I should make the most of it.

I’ll leave you with a thought from one of Aldo’s blogs that really struck me, that just maybe we spend too long looking in the wrong direction and how important it is to remember how far we have come in our own personal journey:

“.…..when looking forward and upwards at your goals it can be easy to lose faith and be intimidated with the task ahead. Just a thought, but maybe the true mark of progress is turning round and looking at the phosphoresesce in your wake, from my spot here on the bow at sundowners, progress is measured in how far we have come.”

2 thoughts on “Five guys, a tiny boat and a world record!”